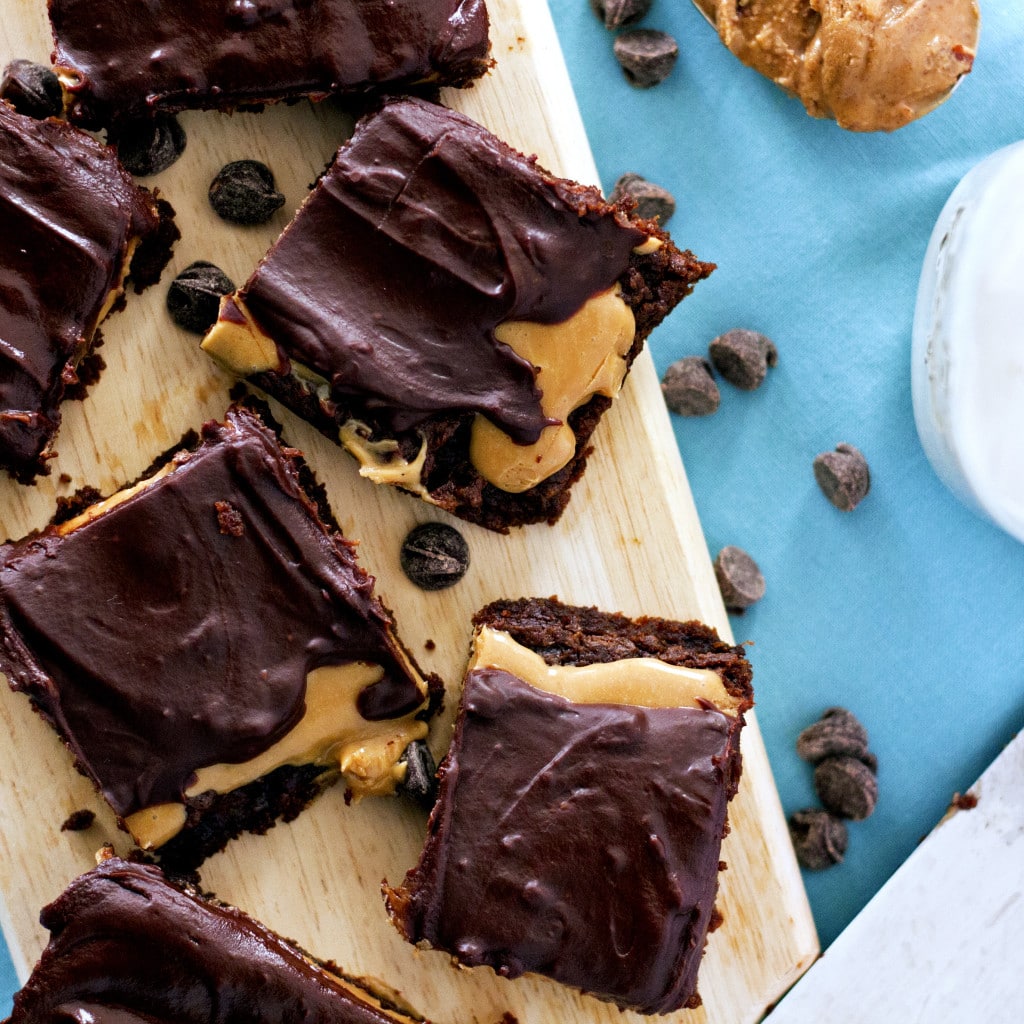 These Peanut Butter Cup Brownies are so fudgey, rich, and decadent thanks to a SECRET ingredient, and they are actually good for you- no guilt here! As always they are grain-free, gluten free and paleo (sub almond butter for peanut butter) and they only have 6 simple ingredients and NO FLOUR!

Peanut butter and chocolate is a flavor match made in Heaven! Who’s with me? There is something about that combination of creamy, salty and nutty peanut butter and dark, rich, and melt-in-your-mouth chocolate that makes my tastebuds extra happy. These days I often use almond butter as a perfectly good stand-in for peanut butter, because it is a healthier choice. With this recipe you can use either one! 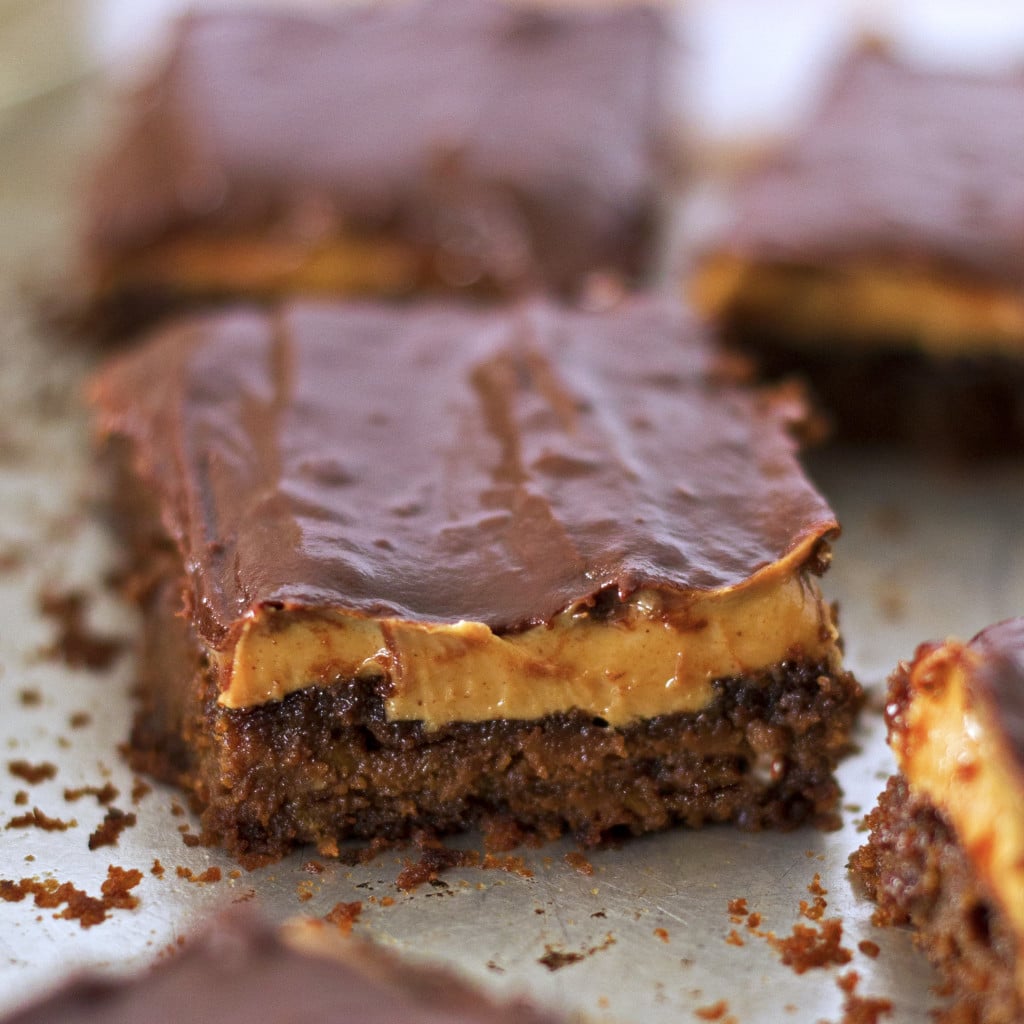 Cricket is also a huge peanut butter fan, especially after a energetic romp outside. Peanut butter and almond butter are a great protein-packed pick-me-up after a good workout for humans and dogs alike.

Yesterday we ventured out into the winter wonderland in the midst of the blizzard because Cricket loves to play in the snow. Every time it snows she is like a kid at Christmastime. Her eyes have that excited spark and twinkle, and her excitement is palpable. I mean she literally stands at the door and groans until we get to go outside. Every time you look her way or walk by her she, not-so-quietly, says “Errrrr….Mmmmm….Errrr.” So after 15 minutes of the grunts and goals I broke down, bundled up the family, and out the door we went.

We were greeted by a forcible wind that drove the snow sideways, the ice flakes settling on our eyelashes and making it difficult to see. Oh boy, this is going to be fun, I thought sarcastically. Upon opening the door, which took some effort with the opposing gusts, Cricket was out in a flash! She bounded into the white powder with as much exuberance as a young puppy with a new squeaky toy. The light and fluffy snow was up to her shoulders and she flew around the snow-covered field at top speeds, bounding into the air like a bunny. It made me so happy to see her have so much joy! You have got to watch this crazy dog in action: 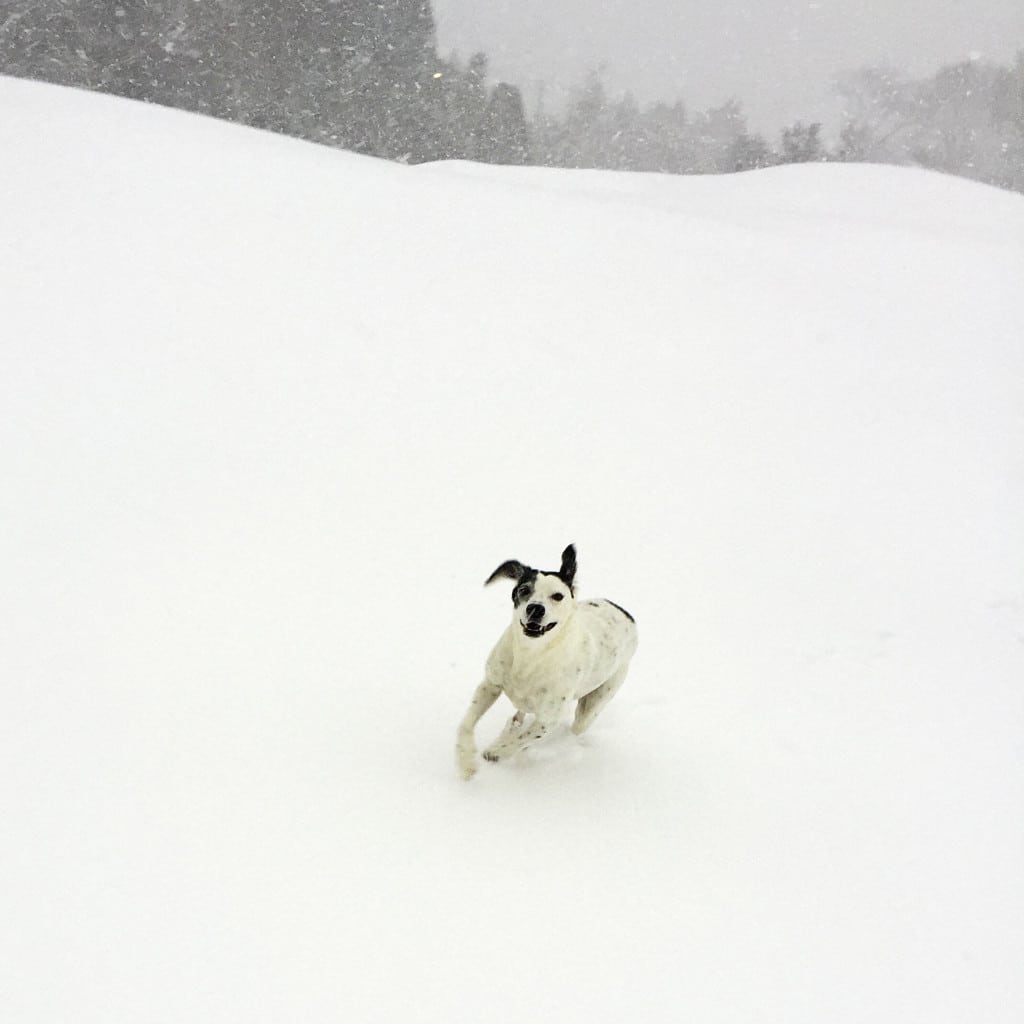 So that fun lasted about 10 minutes, before our frozen fingers and toes ached so badly that we had to retreat to the warm indoors. I de-thawed and made these yummy and healthy Peanut Butter Cup Brownies and Peanut Butter and Bacon Biscuits for Cricket. Everybody had their snow fix and their peanut butter fix for the day!

And the SECRET ingredient that makes these brownies extra moist and fudge is…..butternut squash! No joke- it makes an amazing base, and you’ll never guess it’s hiding in these awesome brownies. 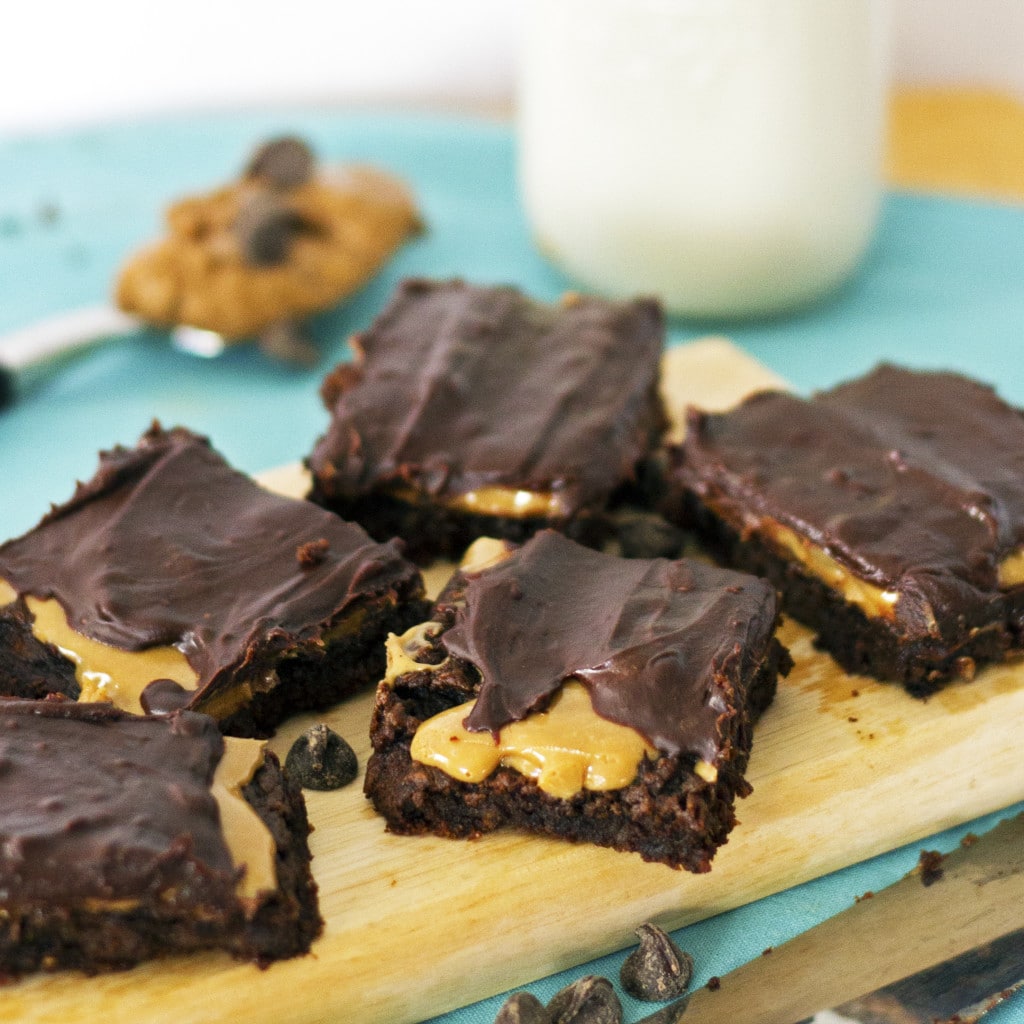 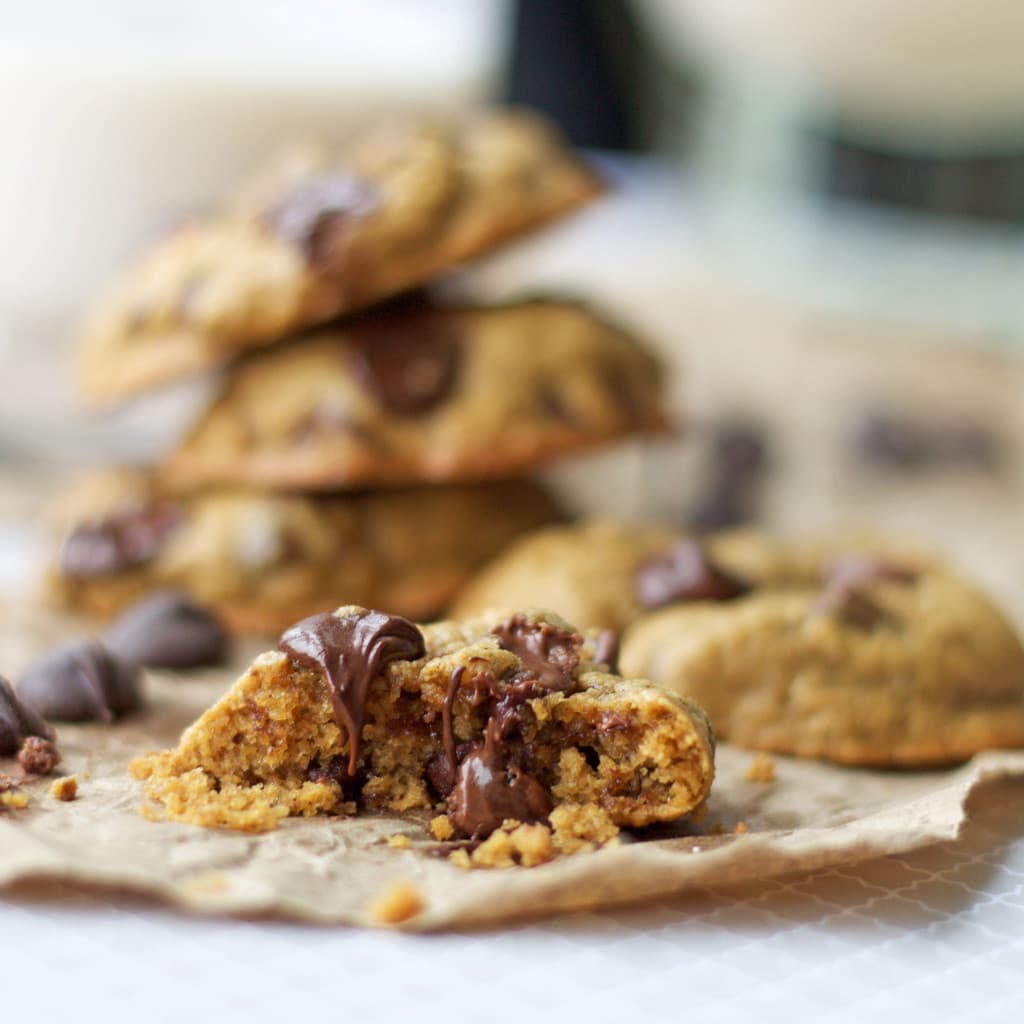 These Peanut Butter Cup Brownies are so fudgey, rich, and decadent thanks to a secret ingredient, and they are actually good for you- no guilt here! As always they are grain-free, gluten free and paleo (sub almond butter for peanut butter) and they only have 6 simple ingredients and NO FLOUR!
Prep Time 10 minutes
Cook Time 25 minutes
Total Time 35 minutes
Servings 8 brownies 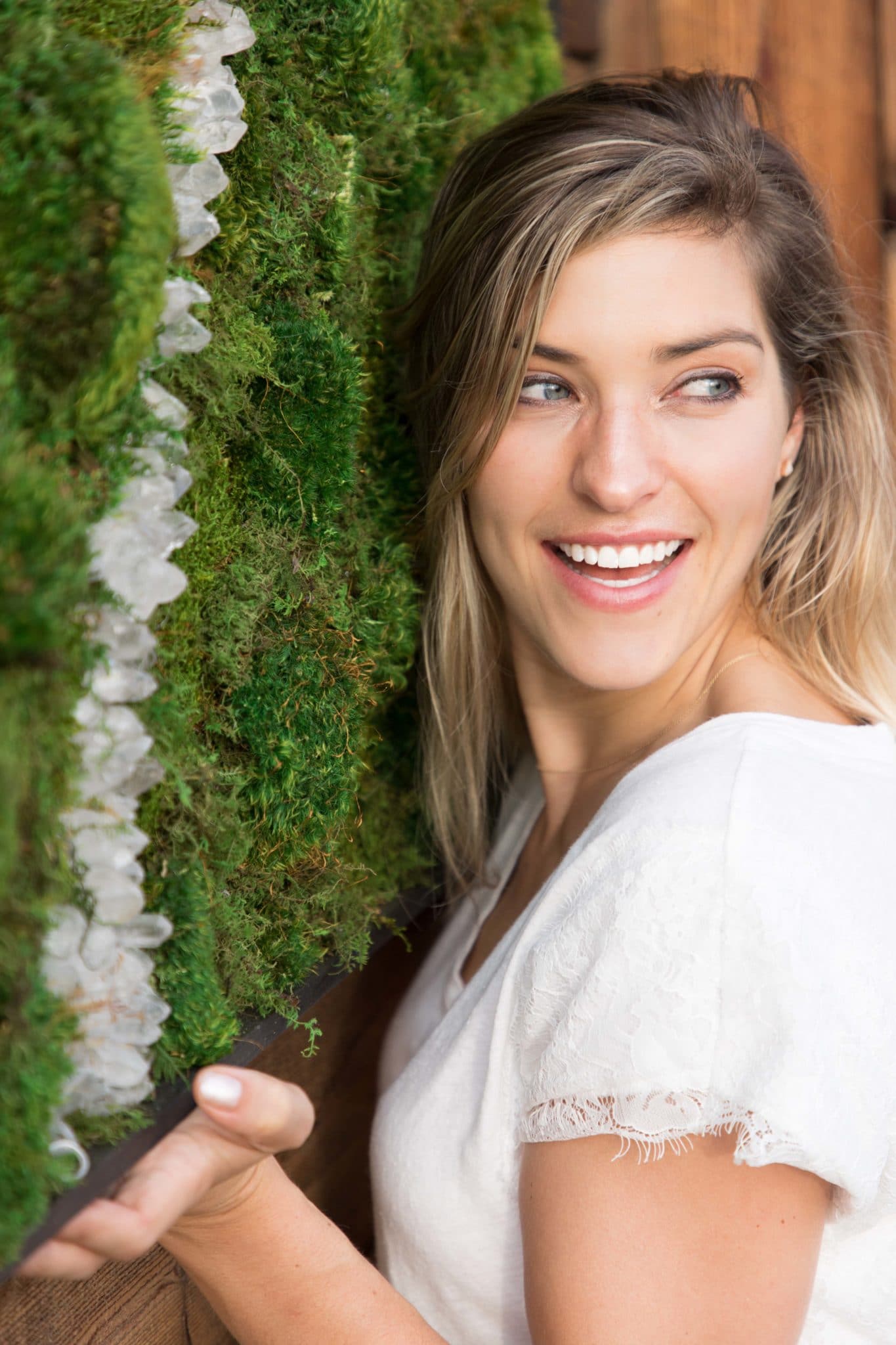 Hi!! I’m Kelley, welcome to MIND-BODY-VISION! Here I share effective tools on how to create your BEST LIFE, beginning with a clear VISION! Join me on the most rewarding journey of your life! 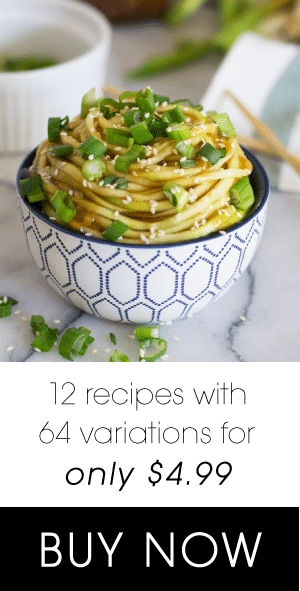